- november 02, 2012
The Lundberg family from Altervattnet in northern Sweden 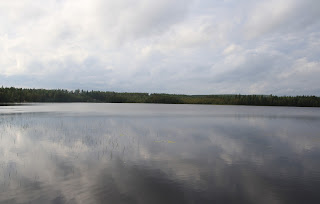 ﻿
On this page I have written a short history about the Lundberg family from Altervattnet, parish of Älvsbyn in Norrbotten County. It is about Karl Johan Lundberg and his family and the sons Johan and Anton's families that went to USA. Last updated: 2 Nov 2012. I have also started a Facebook group for relatives: http://www.facebook.com/groups/545388215486990/

The son Ludvig built a new house on the croft probably in 1894 and the house is still standing. He moved with his family to Klöverträsk in 1898 and the croft was taken over by his brother-in-law Oskar Bergdahl (1868-1935) who was married to Hilda. They bought the croft from the company Munksunds Sågverks AB in 1912. The son William Bergdahl (1896-1972) became the next owner and lived there with his family until 1966.

Anton and his family

Anton and his wife Lovisa Lundberg (1860-1921) got married in 1891 and they lived as crofters in Altervattnet (he was given as a worker in 1892 and 1896). Lovisa had the daughter Hulda (1889-1978) from her first marriage and together they got the children Emil (1892–1973), Hugo (1896–1952), Meline/Emelia (1899–1916) and Svea (1901–78). On June 4th 1902 the family took out a moving license to USA. The trip started from Gothenburg on June 20 with the ship Ariosto to Hull in England. Anton's cousin Frans Sandstrom was also doing the trip with them. They came by train to Liverpool and on June 25 they sailed from there with the ship Haverford via Granton in Scotland and came to Philadelphia, USA on 6th July. According to the passangerlist they had 25 Dollars in cash and they should go to Sherrard, Mercer County in Illinois to see N. P. Samuelsson (Frans Sandstrom should see another person there).

In the year of 1905 the family lived in Rock Island, Rock Island County in Illinois and Anton worked as a carpenter. There was around 3500 Swedes living there then. Four years later the family had moved to Moline and at that time it lived around 8000 Swedes there. Anton was a construction builder and the family became Naturalized in 1909 according to the Census. In 1910 the son Elvert (1910-1966, Texas) was born. In 1916 the daughter Emelia died under a appendectomy seventeen years old.

Anton built several houses both in Rock Island and in Moline and from around 1910 he was a contractor. In 1916 he had a company together with Alfred H. Nelson (probably a son to his oldest sister) and the name was Lundberg & Nelson Contractors. The company seems to have only been for a short while and the next year Lundberg lived at a different address.

From 1919 the family lived at 829 21th Avenue in Moline in a house that Anton built (see the photo below). This was the seventh address they lived in for ten years. Lovisa died in 1921 and  "Nels A Lundberg" remarried in 1923 to the widow Mrs Mathilda Olson (she had two sons). Nels A. Lundberg died on January 11 1928 after a week of gangrene in his leg in an accident and was buried at Riverside Cemetery. He was just 59 years old and in the obituary mentioned including a brother in Sweden, suggesting that the then still had contact with his family in Sweden.

It may here be briefly mentioned that Anton's nephews John Helmer / "Elmer Nelson" (b. 1886) and Alfred Hjalmar Nilsson (1888-1962) emigrated from Alträsk, Överluleå to North America in August 1906. They were sons of Anna Lovisa Lundberg (1861-1891). Probably they should see their Uncle Anton in Moline, Illinois. Alfred was a carpenter since 1913 and it seems that he is identical to the construction company together with Anton Lundberg in 1916. From about 1920 the brothers lived in Chicago and worked as carpenters. Both were married and Elmer had at least two sons. 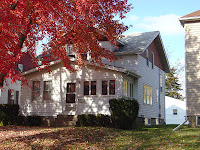 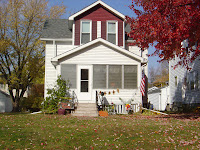 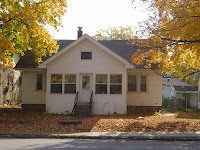 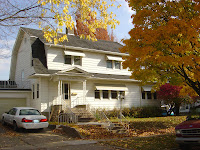 Four houses built by Anton Lundberg. The first was where they lived since 1919 and the house below
left Anton built to his son Emil. Photo: Chris Barker Illinois 2011.

Of the children Emil worked in early years as a carpenter, but then for a long time foreman at a daily newspaper in Davenport, Iowa. Emil married in 1916 and had three daughters and one son. Hugo was a commercial artist (worked with advertising), married and had the son Gary and also lived in Iowa. Elvira was married twice but had no children and also lived later in Iowa. Elvert worked as a bookkeeper in 1930, but he became a military officer and was involved in World War II and the Korean War in 1952 as a First Sergeant. Elvert Lundberg was married but had no children, and died in Texas in 1966.

Johan and his family

Johan Lundberg married in 1891 to Vendla Grönlund (1871–1956) from Korsträsk in Älvsbyn. They lived in Altervattnet for a short while and then bought a little bit of land from her parental farm for 600 Swedish crowns. The number of the farm was Korsträsk 4:20. They built a house and started to farm. Johan was also a worker but since 1907 it was very little work. 1908 was also a tough year and the family didn´t have money to pay the taxes for 48 SEK. They got two weeks to pay otherwise their cow, a sleigh and hayrack should be taken as payment. Johan solved this in the end by request and receive compensation equal to the amount of land reclamation as he had done ten years earlier. He had prayed to God that "as being poor, I pay my bills, but I have no money."
﻿
In 1906 the oldest daughter Elvira was a maid at her Aunt Hilda's family in Altervattnet during six months. She was 12 years and helped out in the barn. Her father followed her there and it was 2,2 Swedish miles one way. She should go home at Easter and as she needed a new dress her Aunt Hilda sewed her a three colored dress that she got instead of money.

Johan wrote to his brother Anton in USA and asked if there were jobs there if they should come. The answer was yes and the family seld their farm and belongings. The moving license to USA was dated June 2 1910 for John, Vendla and their six children Walfred (1892–1951), Elvira (1894–1986), William (1896–1965), Herbert (1900–83), Agnes (1904–69) and Harry (1906–2001). They travelled from Gothenburg with the ship Eldorado to Grimsby June 15th. Three days later they left Liverpool with S/S Lusitania and came to New York June 24. The trip cost 150 Dollars and Johan's mother Anna in Altervattnet was their nearest relative. They should see his brother Anton at the address 142 6th Avenue in Moline and they came there by train three days later.

Johan or ”John A. Lundberg” got a work the very next day at the Moline Plow company where they maid John Deere plows. It was a great job that payed one Dollar a day for ten working hours. Even the eldest children got works helping to supply the family. In 1911 the family lived at 1176 22nd Street in Moline (see photo below) and it was close to Anton's house. They wanted to farm and moved to Buffalo in Iowa in the spring of 1912 and bought a farm with quit a new house for 600 Dollars. Soon after that John became ill in cancer in the pancreas and after a few days in hospital in Moline he died on August 17th, just 49 years old. John only got two years in USA. The family lived in Moline and Vendla remarried her cousin in 1919. The daughter Elvira got married and lived in Rock Island. The three oldest sons moved to Michigan around 1920 and worked as tooldiers. Also Vendla and the children Agnes and Harry moved to Michigan around 1929.Elvira maid a trip to Sweden in the 1950s. In the year of 2000 I got contact with Elviras grandchild Christine Barker in Illinois.

Lägg till kommentar
Läs in mer... 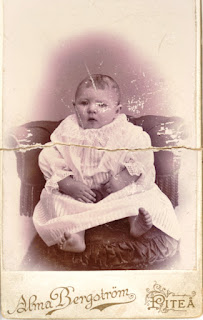